Being CO-OPy: 5 Ways to Broaden Your Horizons 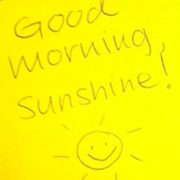 You don’t have to be a part of a CO-OP to be CO-OPy—but you do have to be willing to have fun, be flexible, think outside the box and, on occasion, say so-long to your comfort zone. While these values make for a progressive and unique work environment, I highly recommend they be adopted as basic approaches to everyday life.

Approaching life in this way is not something that comes naturally to everyone, and that’s okay. I know just as many people who would find these ideas cringe-worthy as I do individuals who probably already practice them. Whether you identify with the former or the latter (or somewhere in between), the following are a few ways you can expand your CO-OPy horizons.

Yes, they take more effort than an email and yes, they require actual paper—but the reasons that make them a pain are also reasons for why they matter. It is amazing how much people appreciate getting a hand written note, in both your personal and professional life.

At a previous job, I would get to my office and leave to work off-site before anyone else arrived for the day. About once every few weeks I would leave some of my co-workers sticky notes inside their laptops simply wishing them a good morning. The appreciation they expressed for such a small effort was amazing—and it made me feel good to know that I made them feel happy, even if just for five minutes.

Hand written notes are unexpected and unique. Think of how many emails, tweets, or Facebook posts you send and receive each day. Think of how many hand-written notes you get a day. They remind someone they’re not forgotten and that you value your relationship with them. And, the fact that studies show that expressing gratitude in this way has been linked to “better health, sounder sleep, less anxiety and depression, higher long-term satisfaction with life and kinder behavior toward others,” doesn’t suck either.

I have a friend, Natalia. She is one of the smartest and most genuine people I have ever met. But one thing I love about Natalia that sets her apart from anyone else I know is that she regularly tells people what she likes about them. I have found this to be a rare and beautiful quality. Her observations go beyond “you look nice today” and are more reminiscent of; “You always have a positive attitude, and I really like and appreciate that about you because often times I need someone like you around to set me straight when I’m feeling negative.” The first time I heard something like this come out of her mouth I though; well, that was specific. And, that is precisely what makes her so thoughtful.

When I witness her in action, I can see a physical and immediate change in the receiver’s body language—they look relieved that someone appreciates them and in that moment, it makes them feel cared for. Having been on the receiving end of these compliments, I can confirm this is true.

It’s easy to think nice thoughts about someone, but it’s a whole other ball-game to say out-loud to that person what you like or appreciate about them. Even if it feels awkward or foreign to you, I suggest you try it none-the-less. Telling people what you like about them (as long as it’s sincere) is a simple way to make someone’s day, and chances are they will not soon forget you or your kind words.

Limbo contest? Sure. 9:45am walking club? Why not. Free face-painting on the street? Sign me up. Make an effort to take part in what’s going on around you. Afraid of looking stupid? Do it anyway. If you’re someone who is a serial non-participator, make an effort to break the cycle. It’s always easier to sit back and watch, or sit back and not watch at all—but I promise you it’s also a lot less fun and a lot more lonely.

Once you start choosing to participate in events that are convenient, practice going out of your way to participate in play. For example, head to Washington Park with a pair of cleats and join a pick-up soccer game. Opportunities to play are endless—once you get a taste of the Kool-Aid I have a sneaky feeling you’ll begin to understand their worth.

4. Notice and acknowledge those is need

Buy someone who looks hungry a meal, escort an old lady across a busy cross-walk, or even just smile at random passers-by. Do these thoughts ever cross your mind? Does it ever dawn on you to give someone random the time of day—or are those in need often invisible to you? Challenge yourself to take notice of these people and acknowledge their existence in whatever way you feel comfortable. Make it an impulse.

Having worked with hundreds and hundreds of homeless individuals both across the country and abroad, one modest yearning was echoed from place to place; a desire to be acknowledged as a human being. It’s that simple. Take the time to stand with someone for a few minutes— ask how their day is, ask their name, and shake their hand. You’d be amazed at how valued this simple form of human contact is, especially to those who are used to people walking swiftly by while trying to avoid eye-contact. Everyone deserves a chance to tell their story—but if you feel that this is too far outside your comfort zone, a smile, nod, or hello will do just fine.

Sometimes something that has already been said is the best way to say something.

“We live in a world in which we need to share responsibility. It’s easy to say ‘It’s not my child, not my community, not my world, not my problem.’ Then there are those who see the need and respond. I consider those people my heroes.” — Fred Rogers